The MillaMia office/studio has been firmly located in a spare room at home since we started the business back in 2009. It was a relatively small operation back then, and in terms of the space MillaMia the business required to operate in the early days, the office was more than adequate to house everything.

As we grew and evolved - publishing more collections, taking on more stockists and staff, expanding into the US and Australia, it's fair to say that the 'bijou' MillaMia office did not. I ended up with cartons of yarn and piles of books spilling out into the hall, having to conduct meetings in the dining room and taking over vast swathes of our parent's house for storage! I understood, as did my very tolerant husband that starting a business meant many sacrifices in the early days, and it's fair to say that we both looked forward to a future with me running MillaMia successfully from somewhere other than our home.

Our first move was when we switched the fulfilment of our orders to a third party warehouse in Hampshire - enabling us to focus less on picking and packing and more on customer service and product development. But the strain on the office side of things was really felt by the end of last year.

Happily MillaMia is thriving and with our third child arriving 8 weeks ago, making space for my family and the business became somewhat of a priority. We took a deep breath and made the decision to move MillaMia to a shiny new office. As you can imagine the upheaval and disruption was immense - it's hard to believe we EVER managed to squeeze everything into such a small space - but it was also cathartic and incredibly exciting. We ruthlessly cleared out and 'reassigned' stuff that had accumulated, honing everything down and packing it into boxes. I ordered new office equipment, made sure we had the tech support we needed for a smooth changeover and booked some very helpful guys to do all the heavy lifting - it really wasn't long before we were almost properly installed in our lovely, bright new office.

It feels like a real milestone to me personally, and a truly uplifting and motivating way to start 2013. I know I'll remember this move as something momentous - and I'm sure my husband will look back more than fondly on the day he got his home back! 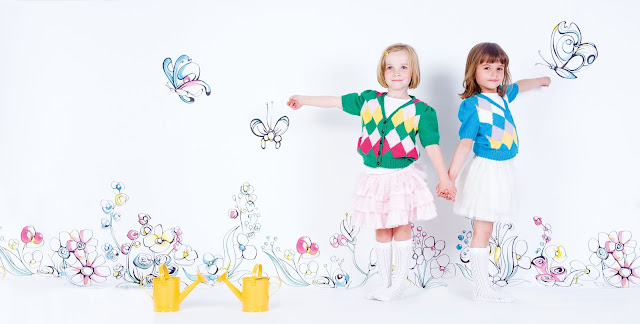 In my last post you may have noticed that I was VERY impressed with an article by Daniela Nii in knit.wear magazine. The technique in this tutorial is 'Shaped Intarsia' with the intent to show knitters another method of changing colours in order to avoid the jagged edges often found on the diagonal lines. Having avoided intarsia knitting to this point, in part due to the ugly diagonals (and also because my first attempt at 'wrapping the stitches' resulted in more holes than less), I was thoroughly excited at the prospect of finally mastering this colourwork technique with Daniela's method. I was due, I thought, for another colourwork epiphany.

As I re-read the article in order to understand it better, it occurred to me that I should think about where best to apply my newly acquired technique (once, of course, I had actually mastered it), and I was struck by the idea that it would be nowhere better suited than to an argyle pattern. Argyle, by it's very nature is a series of diagonals and diamonds, and in theory, should be the perfect pattern for some trial swatching. In a moment of inspiration, I recalled the Pia Cardigan from Little Rascals and set about casting on some 50 stitches in order to first learn and then practice Daniela's method.

The premise of 'smoothing' these diagonal lines as you change colour, is to use sets of increases and decreases either side of the colour change. For example, a right slanting line involves knitting to 2sts before the colour change, decreasing by k2tog or ssk, twisting or 'wrapping' the 2 colours and then using a left lifted increase or a m1l to make up for the decrease and so keep the stitch count correct. For a left slanting line the principle is the same whereby you knit to 1st before the colour change, do a right lifted increase or a m1r, k1, twist the 2 colours and the decrease by ssk or k2tog. I will say at this point that your choice of increase and decrease will affect the 'look' of the edge as Daniela fully explains in the article - you will end up with 'decorative' or 'subtle' edges.

Now, in principle, this all sounded very straight forward to me, but as I began my swatches I realised that I hadn't grasped the technique at all. You can see my initial attempts below - the wraps are correct but my increases and decreases are disastrous and completely wrong where I didn't follow the instructions exactly and in my infinite wisdom misunderstood what she meant by 1st or 2sts before the colour change. You may think that this seems like a very simple and clear instruction, and it is, except that I began to overthink the process and ended up increasing a stitch and then knitting another stitch in the new colour, effectively colouring 4 stitches per row with the contrast colour, rather than the 2 stitches required. 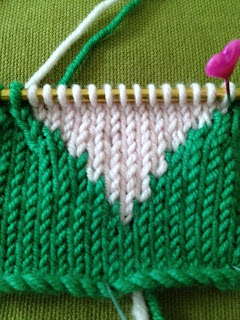 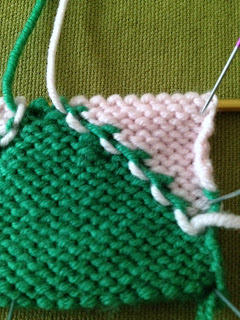 Once I had worked it through (after many rows of more jagged edges than the standard method would have produced), I could see where I had gone wrong and rectified my mistake. It was definitely a useful exercise in the disciplined following of instructions for me, and so I thought you'd like to see this appalling first attempt! It's clear that the sections between 4 and 5 and between 2 and 3 are horribly wrong whereas in sections between 1 and 2 and 3 and 4 I had finally managed to master the technique. 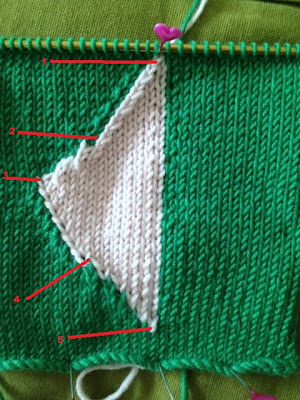 In the following photo, you can see that I have completed 2 diamonds, one using Daniela's method and the other following the standard intarsia technique. Having the 2 to compare, I have to say that I'm not now entirely convinced that the smooth edges add anything more appealing to the overall effect. I'm pleased with the result, and yes, it is a beautifully smooth edge BUT there seem to be some other issues that I hadn't reckoned on. Firstly, the smooth edge comes at the expense of some quite accentuated bumps or ridges where the decreases sit and secondly the diamond is noticeably smaller than the 'standard' one. Thirdly, I had real trouble at the bottom of the diamond when I only had a single stitch and needed to increase and decrease in this very small area neatly - I may be able to work through this problem satisfactorily with some practice but then when I came to the top point of the diamond, decreasing from 3sts to 1st I had to use re-use a stitch I'd already knitted to provide a st to pair for a k2tog. This is rather untidy, and also made me consider how this might also impact on a series of diamonds in an argyle pattern - would each point at top and bottom prove problematic? I confess that my inexperience in this method may very well be the only issue here, but I think I still need some convincing. 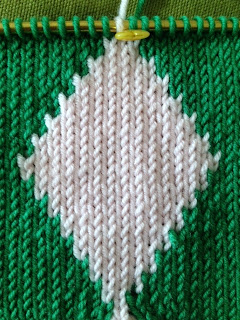 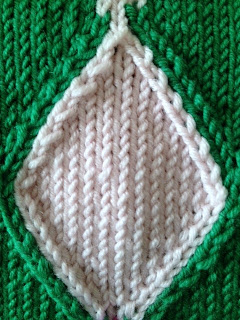 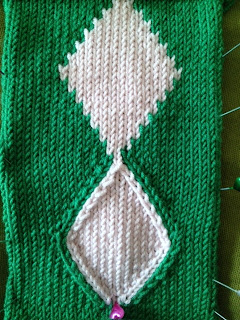 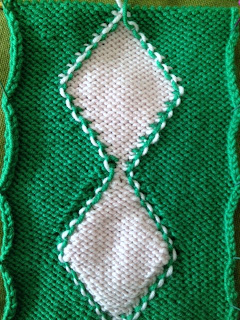 On a more positive note, I can see many other applications for Daniela's method. In my copy of knit.wear, there is a picture of a beautifully executed circle and I imagine that other, similar motifs would work equally well. The method in itself is sound, and impressive in it's ability to eradicate those irritating jagged lines, and I'm glad to have added it to my arsenal of advanced knitting techniques. I just need a pattern now that plays to it's strengths - some sort of colourwork that would benefit from smooth edges in a geometric design . . . oh! hang on . . . Kaffe Fassett is the KING of geometric colourwork . . . Now, where did I see that pattern for an intarsia blanket . . .

As you may all know, these last 2 months have been a whirlwind of activity at MillaMia HQ. We've launched a new adult collection - Colour Coded, exhibited at 2 major trade shows and 2 retail shows and one of us has had a baby! It truly has been the busiest, and most rewarding couple of months, and with so many more exciting new developments in the near future, it seems that we won't have time for a breather just yet. 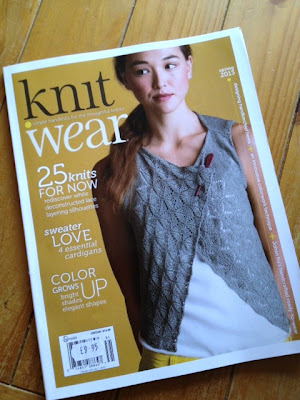 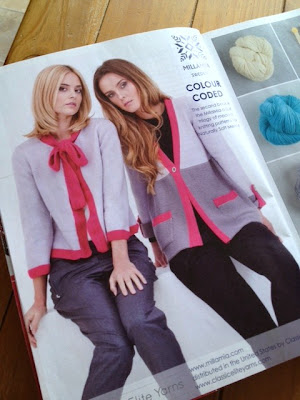 Alongside these major events, we've run a considerable advertising campaign to support the launch of our 2 adult collections - Country Escape and Colour Coded. I'm certain most of you in the UK will have seen at least 1 or 2 of these adverts - the amazing double pages in The Knitter and Knitting magazine, the full pages in Knit Now and Knitting and Yarnwise. But, did you know that this month has seen our first ever advert in a US magazine? We are so excited to have teamed up with our US distributers - the wonderful Classic Elite Yarns to produce this simply stunning full page advert in one of America's premier knitting magazines, knit.wear. (Our photo by talented www.emmanoren.com as always) 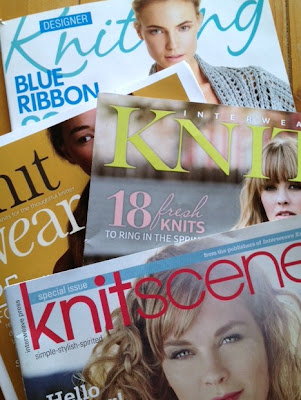 knit.wear is actually one of my personal favourites from across the Pond - a magazine that truly focuses on beautiful, wearable and interesting handknits. A special publication from the people at Interweave Press, knit.wear states that they are concerned with 'simple handknits for the thoughtful knitter' which I have certainly found to be true. The designs are cleverly constructed, with intriguing techniques that would inspire even the most experienced knitter, yet produce garments that are aesthetically pleasing and immensely wearable - a rare thing indeed. Designers featured in the latest issue - Spring 2013 include Courtney Kelley, Kate Gangnon Osborn, Norah Gaughan, Laura Zukaite and Cecily Glowick Macdonald - a veritable heavyweight selection of incredible talent.

Whilst I applaud the pattern content, my standing ovation must go to the superb technical piece on shaped intarsia written by Daniela Nii. This article, full of detailed photographs, clearly written technical advice and tips is a true knitting gift to help us all create beautifully shaped intarsia motifs without the jagged diagonal edges. What a revelation! Thanks to knit.wear and Daniela for this super-helpful tutorial.

There are a number of other fantastic US magazines that you can easily source here in the UK, and which give you a wealth of information about the handknitting community in the US as well as a variety of patterns which have a subtly different style and feel to those we see in the UK magazines. Interweave Press offers a wide variety of textile based magazines - Interweave Knits, Interweave Crochet, Knitscene, a 'Weekend' edition of their knitting magazine, as well as some more specialised magazines. There is also Vogue Knitting (known in the UK as Designer Knitting) which totes itself as 'the ultimate knitting experience' - full of patterns that push the boundaries and touch at times on knitted art.

These magazines are available from good yarn stores across the UK (I have found the Interweave selection at Rainbow Silks and all of them at Get Knitted but your local yarn store may also stock them), and some are also available in good newsagents.
(posted by Max)
Posted by MillaMia at 03:21 No comments: